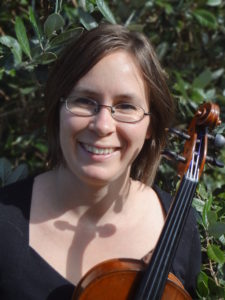 Born and raised in Germany, Rebecka took up the violin at age 6 and started playing in various local and regional symphony orchestras at age 11. While studying for her linguistic degree in Leipzig, she was a regular player in the ‘Akademisches Orchester’, playing subscription concerts in the
Gewandhaus, home of the world famous Gewandhausorchester.

Rebecka moved to New Zealand with her husband in 2006, joined the Bay of Plenty Symphonia in 2009 and took over the role of concertmaster in 2012. Since then, she has enjoyed working alongside Justus as MD and the other musicians in the orchestra.

Rebecka also plays regularly for Opus Orchestra and enjoys getting together with likeminded musicians to play chamber music as well. Playing music is her escape from a busy life as a freelance translator and Mum to four children.