Bay of Plenty Symphonia was joined by Scholars Pro Musica in a programme centred on the Holst manuscripts that were found in our library in 2017. The concert featured English orchestral and choral music of the late 19th and early 20th century. Dr Bronya Dean gave a preconcert talk about the find and the original manuscripts were on display.  The manuscripts will now be donated to the Holst Birthplace Museum in Cheltenham, England.

CLICK HERE to view/listen to two live recordings of these works from this concert on 15 April 2018. 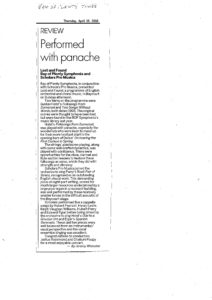